It happens in all complex web applications – the service you are operating goes down, and users are affected. In order to fix these outages, and prevent them from happening, software teams need to have some way of measuring “how bad” an outage is.

Metrics for “availability” – which is a measure how much of the time a site is “up” have been around for a while, but in the paper “Meaningful Availability” from Google’s Tamás Hauer, Philipp Hoffmann, John Lunney, Dan Ardelean, and Amer Diwan, the authors propose a new metric that more accurately measures availabilit.y

In the paper, the authors discuss current approaches to measuring availability and their drawbacks, in addition to explaining the value of the approach they are proposing.

I’ve personally only really had expososure to “count-based” metrics for measuring availability (Sucess Rates), so this paper was a great introduction to other approaches. It also does a great job of making clear that different applications have different needs in terms of how to measure availability.

Why does what metric we use matter?

In this paper, the authors discuss a few different metrics for measuring availability. But before diving into those, the authors describe qualities of a good availability metric, which can then be used to evaluate whether a metric is right for the task at hand:

Prior Art: What is “availability”?

The authors begin the paper by going through existing approaches to measuring availability.

A common way of measuring availability to use the ratio of the amount of time that a service was up. The standard formula for this is:

The main problem with using this is that it requires labeling periods as time as either outages or “not outages”, and in distributed systems, outages are usually partial. Because of this, the metric isn’t super meaningful, as there’s no way to distinguish here between a time when a service is at 90% availability from when it is fully down.

Another common way of measuring availability, and the one that I am most familiar with, is to use a “Success Rate”. This is computed by dividing successful requests by the total requests:

Unlike the time-based metrics, SR takes into account partial outages. However, for some services, it’s still an imperfect metric:

Given the downsides for both count-based and time-based availability metrics, none of these metrics satisfy the criteria defined above.

The authors then introduce a metric they call “User Uptime”, a metric that unlike the two metrics above, is both meaningful and proportional.

This metric is calculated as the sum, for each user, of the amount of “uptime” they experienced on the app, divided by the total time spent on the app.

This is similar in concept to the time-based availability metric defined above, except measured on a per-user basis, which is more appropriate in a distributed systems context. This is because it is tenable to measure whether a user was experiencing “uptime” or “downtime”.

The authors posit that in this case, you can take the approach of counting all time until a failed request as successful, or all time “before” a successful a request as failed, and both achieve the same outcome. Another approach could be splitting the time in half, counting half as uptime and the other as downtime.

Why is this proportional and meaningful?

Unlike the count-based success rate metric, this metric is meaningful because it measures the amount the time that the application was unavailable to users. If there is an outage, for instance, changes in client behavior (issuing lots of retries, or giving up), don’t influence the metric.

The authors performed an experiment in which they compared Success Rate (count-based) metric to the user-uptime metric. In this experiment, they ran traffic for an hour, and for a 15 minute period, simulated an outage. Failed requests would result in a retry.

The user-uptime metric accurately measured the system as having 75% uptime, while the success rate resulted in a lower number, demonstrating the higher accuracy of this number.

A problem alluded to earlier with both time-based and count-based availability metrics is that over a longer period of time, it is hard to distinguish between flakiness, for instance, a constant stream of errors, from outages (ie. a 6-hour long outage every quarter). User-uptime does not solve this problem either, as at the end of the day, we still just have a single number to look at to assess availability over the last N days. 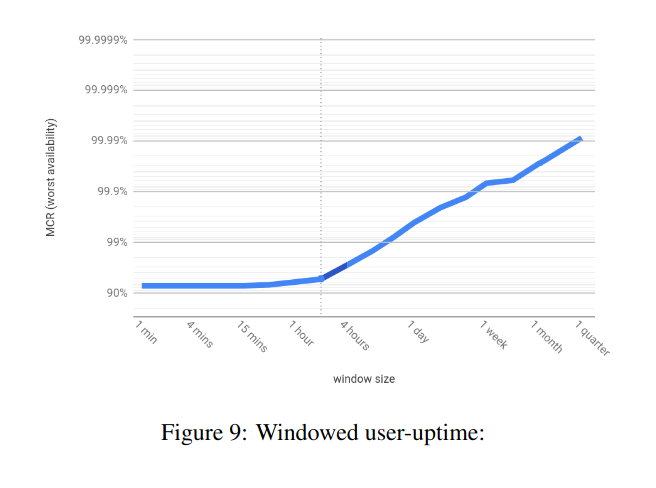 Because this metric provides insight on smaller timescales, this allows teams that use this to dig into windows of particular bad availability, and on a longer-term basis, actually track if the team is getting better at removing the higher impact outages. And especially because in the implementation that the authors discuss, they keep a mapping of which window was the worst for each time duration, they can dig in and see what was going on then.

The authors describe how Google adopted this new metric, which they used alongside Success Rate, and describe a few examples that demonstrate how it gave them better insight into their systems.

In one of the examples, the authors describe a scenario that due to one heavy customer behaving in an unusual way, the success rate for the overall service dropped significantly. The user-uptime metric did not, because it did not suffer from the same bias as success rate. From this divergence, the authors were able to identify that this SR drop was probably due to a small number of customers, and then were able to dig into charts they had that were specific to heavy users.

In another situation, both the success rate and user-uptime of Google apps dropped for a significant amount of time. This initially indicated a single cause of this drop in performance. However, by lining up the times on a graph, the user-uptime recovered before the success rate did. This divergence in the two metrics suggested that there might be a second cause to investigate.

The main thing I’m still curious about having read this paper is to learn more about cases in which switching to windowed user-uptime actually drove different behavior on Google’s engineering teams.

While it’s clear from the incidents described above that the insights from the new metric are useful, I’m curious if having the windowed data actually drove Google to work prioritize projects that they would not have otherwise.

Overall, this was a really interesting paper to read. It definitely changed my perspective on how to measure availability. Both success rate (count-based), and MTTR/MTTF (time-based) metrics are imperfect and can be biased, so it’s important to think about what you really care to measure from the perspective of your application. This requires taking into account the application’s behavior, client behavior during outages, and other information about your particular application.

The Magic of Outer Wilds

Content Warning: Minor Spoilers for Outer Wilds You wake up in front of a campfire, across from a friendly-seeming four-eyed...

Notes: The Leprechauns of Software Engineering

I've recently been frustrated by the lack of rigor in discussions of software engineering practices. For any topic that might...