This summer, I’ve been working on coming up with better ways to solve network congestion on the internet. In this post, I’m going to talk about why congestion happens and some traditional solutions.

If you’re interested in a little bit more depth, this Jupyter notebook contains the code that I used to get some of the results, along with further analysis of those results.

Before we start, I’m going to give a little bit of detail about how information moves around on the internet.

TCP is a protocol that is used to transmit information from one computer on the internet to another, and is the protocol I’ll be focused on in this post. What distinguishes TCP from other networking protocols is that it guarantees 100% transmission. This means that if you send 100kb of data from one computer to another using TCP, all 100kb will make it to the other side.

This property of TCP is very powerful and is the reason that many network applications we use, such as the web and email are built on top of it.

The way TCP is able to accomplish this goal of trasmitting all the information that is sent over the wire is that for every segment of data that is sent from party A to party B, party B sends an “acknowledgement” segment back to party A indicating that it got that message.

It’s worth noting too that the protocol that TCP works on top of, IP, operates by transmitting packets with a maximum size of 1500 bytes. So if a sender needs to send 100kb, they need to chop up that data into segments, send them over TCP, and receive acknowledgements for all of those segments.

If a sender does not receive acknowledgements from the receiver for a given segment, it will have to resend that segment.

When does congestion happen?

Congestion is problem in computer networks because at the end of the day, information transfer rates are limited by physical channels like ethernet cables or cellular links, and on the internet, many individual devices are connected to these links.

This is a classic case:

In this picture, two senders are sending information over 1GB links, which both funnel into another 1GB link. The second link cannot accomodate all of the traffic from the two links that funnel into it, and will have to drop some packets. If the senders don’t reduce the amount of information they are each sending, this is going to result in a pretty bad situation. In TCP, if the sender detects that a segment is dropped, it resends that segment, so the congestion will continue, and it’ll take forever for both senders to finish.

Detour: What is a link?

Before I dive into what some solutions to this problem are, I want to be a little bit more specific about the properties of links. There are three important details to know about a link:

Using the analogy of the link as a pipe, you can think of the delay as the length of the pipe, and the bandwidth as the circumference of the pipe.

An important statistic about a link is the bandwidth-delay product (BDP). This is a product of the bandwidth and the delay, and is the number of bytes that can fit on the link at any given point in time. This can be thought of the volume of the pipe in the pipe analogy. A link is fully utilized when the number of bytes flowing through it is equal to the BDP. If senders are sending more bytes than the BDP, the link’s queue will fill and eventually start dropping packets.

Before diving into solutions, what indicators do senders have that congestion is happening? As I mentioned earlier, the internet is a decentralized system, and as a result of that, doesn’t have any central coordinator telling senders to slow down if link queues downstream of some sender are filling up.

There are two main indicators: packet loss and increased round trip times for packets. When congestion happens, queues on links begin to fill up, and packets get dropped. If a sender notices packet loss, it’s a pretty good indicator that congestion is occuring. Another consequence of queues filling up though is that if packets are spending more time in a queue before making it onto the link, the round trip time, which measures the time from when the sender sends a segment out to the time that it receives an acknowledgement, will increase.

It’s also worth noting here that senders do not know up front what the properties of the links that they are sending information on are. If you request the website “http://www.google.com”, for instance, the packets you send are probably going through many links before finally getting to Google’s servers, and the rate at which you can send information is fundamentally going to be clamped by the slowest link on that route.

Therefore, in addition to being able to avoid congestion, congestion control approaches need to be able to “explore” the available bandwidth.

TCP Tahoe is a congestion control scheme that was invented back in the 80s, when congestion was first becoming a problem on the internet. The algorithm itself is fairly simple, and grows the congestion window in two phases.

There are two ways that a TCP sender could detect that a packet is lost.

In the Jupyter notebook I talk about earlier, I implemented Tahoe. Here’s a graph of the congestion window over time: 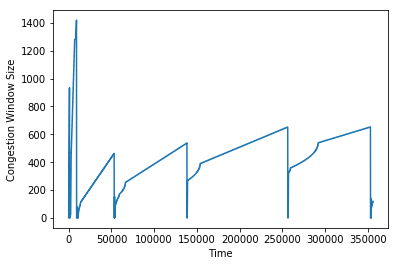 Notice that it has a saw-tooth behavior. The intial spikiness is the slow-start phase, while the smoother parts correspond to congestion avoidance. The sharp drops back down to 1 are due to packet loss.

The reason why Tahoe needs to keep growing is that it’s possible for network conditions to change over time. For instance, if another sender starts sending packets on the same link, it will reduce the bandwidth available, and the sender will need to adjust accordingly. If another sender on the same link stops sending packets, the sender will have more bandwidth available, and in order to utilize it, will need to adjust accordingly.

There are a number of issues with this approach though, which is why it is no longer used today. In particular, it takes a really long time, especially on higher bandwidth networks, for the algorithm to actually take full advantage of the available bandwidth. This is because the window size grows pretty slowly after hitting the slow start threshold.

Another issue is that packet loss doesn’t necessarily mean that congestion is occuring–some links, like WiFi, are just inherently lossy. Reacting drastically by cutting the window size to 1 isn’t necessarily always appropriate.

A final issue is that this algorithm uses packet loss as the indicator for whether there’s congestion. If the packet loss is happening due to congestion, you are already too late–the window is too high, and you need to let the queues drain.

CUBIC: This algorithm was implemented in 2005, and is currently the default congestion control algorithm used on Linux systems. Like Tahoe, it relies on packet loss as the indicator of congestion. However, unlike Tahoe, it works far better on high bandwidth networks, since rather than increasing the window by 1 on every round trip, it uses, as the name would suggest, a cubic function to determine what the window size should be, and therefore grows much more quickly.

BBR (Bufferbloat): This is a very recent algorithm developed by Google, and unlike Tahoe or CUBIC, uses delay as the indicator of congestion, rather than packet loss. The rough thinking behind this is that delays are a leading indicator of congestion–they occur before packets actually start getting lost. Slowing down the rate of sending before the packets get lost ends up leading to higher throughput.

A fascinating issue to consider with different congestion control schemes is whether or not certain schemes are “fair” to other TCP senders on the same link. A scheme would be unfair to other senders if during times of congestion it, rather than also scaled back, continued to send at the same rate. I include here the results when a sender without congestion control is running on the same link as a sender using Tahoe. As you can see here, in a one minute period, the Tahoe sender barely gets any bytes through, because it doesn’t get a chance to increase its window much at all, while the fixed window sender just blasts the network with packets.

While the Fixed Window Sender is a particularly bad case, it is possible for algorithms to be unfair and grow to use more bandwidth than other algorithms. Since there isn’t a central controller responsible for telling senders what to do, it is totally possible for a single sender to be greedy, and as a result there’s a game theortic angle to congestion control too.

Congestion control is a fundamental feature of the internet and is a fascinating exercise in distributed decision making with limited information.

Again, if you’re interested in seeing more details about the experiments I ran, check out my Jupyter Notebook.

Over the last couple weeks, Elad Bogomolny and I have worked on building an ssh-like program that allows a client...

In my [last post](/rc/programming/networking/2018/07/18/intro-congestion.html), I introduce the problem of congestion control in computer networks, and one of the early solutions...