What I learned attempting the TCP Reset attack

Last week I read a fantastic blog post from Robert Heaton about TCP Reset attacks. I figured it would be a good exercise to try to get the author’s attack code working on Linux! I learned a ton about TCP and how to debug computer networks in the process. In this post I give a high-level overview of what TCP Reset attacks are, and tell the story of how I got the attack code working on Linux.

What is a TCP Reset Attack?

For a fuller description of what a TCP Reset attack is, I’d highly encourage you to read Robert’s blog post, but here I give a high-level overview:

Some Background on TCP

TCP is a networking protocol used for two parties on the internet to exchange information reliably. In any connection between parties A and B, if A sends a packet of data to B, B will send an “acknowledgement” packet indicating that B received that packet. If A does not see an acknowledgement for that packet from B, following the rules of the TCP protocol, A will resend that data until it sees an acknowledgement.

An important detail about TCP is that all packets have ordered sequence numbers associated with them. The first packet a sender sends is a random initial sequence number, and each subsequent packet will have a higher sequence number. When the receiver acknowledges packets, they send back an acknowledgment number, indicating what the highest sequence number they have received from the sender is.

The best way to understand this is to actually look at the TCP packets, using a tool called Wireshark.

We start by using the nc program to start a TCP server and client:

We send the string “hello” from the client to the server. For this exchange we get the following packets (note that “hello” is 6 bytes because of the newline character):

Another important aspect of the TCP protocol is that it supports having different flags on TCP packets, one of which is the “Reset” flag (“RST”). The idea behind this flag is that if a party on a TCP connection receives a TCP Reset packet from the other party, it will immediately close the connection. This is intended to be used in cases where a computer receives a TCP packet that it does not recognize – in this case, the computer can send back a RST packet. This might happen if a computer shuts down while a TCP connection is still open, and when it restarts receives packets intended for that TCP connection.

Now, for the attack!

Alright, so we know that parties A and B can each send packets with the reset flag set. However, it turns out, that if you listen to the traffic that is happening on network, an attacker C can send a packet “pretending” to be B, to A, with the RST flag set. A will then close its connection. The attacker has then caused the connection to be terminated!

An important detail about this attack is that according to the TCP specification, in order for a TCP RST packet to be accepted, the RST packet must have the same sequence number that the recipient of the RST packet is expecting.

What does TLS actually encrypt?

My first question when I read about this attack was – well, isn’t TLS (encrypted TCP, used for HTTPS connections) supposed to defend against attackers “spoofing” packets or engaging in man-in-the-middle attacks like this?

The answer to this, upon further inspection, is that TCP header data, information like source ports and destinations, is available for all to see! See this wireshark view of data from a TLS connection: 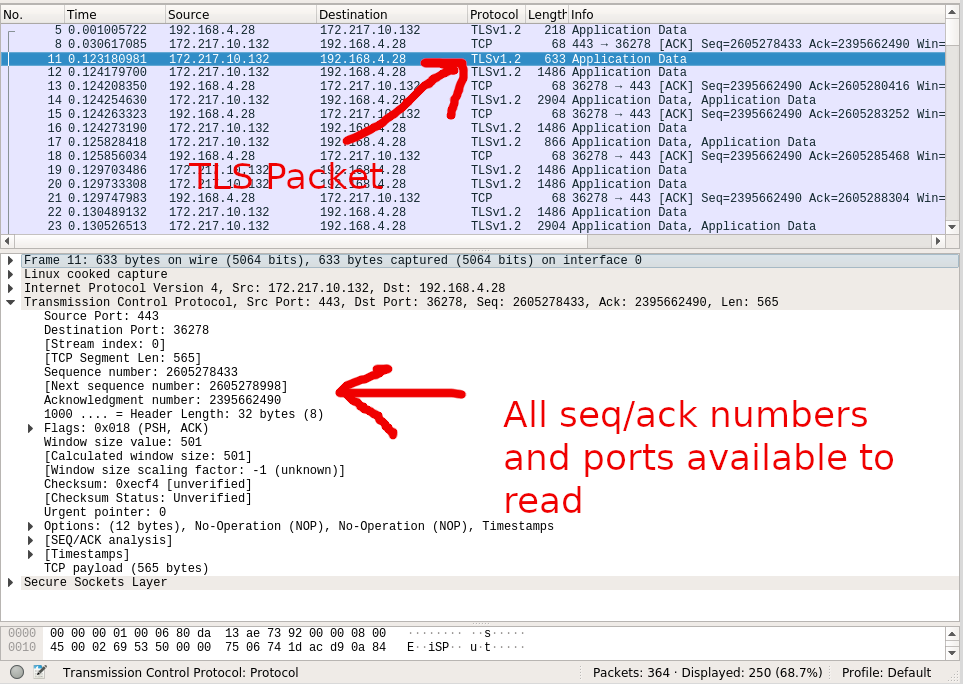 What TLS actually encrypts and can verify the identity of is the contents of the TCP packets. Until you open the actual load of a packet sent via TLS, there is no way to verify that the sender is who it claims to be. Anybody can send a TCP packet with a source IP/port set, and there’s no way of verifying that or not, absent looking at the contents of the packet in a TLS connection.

This is actually important to the functioning of the internet, as routers use knowledge of ports/ip addresses to work properly (your WiFi router is probably using NAT).

Now, because TCP Reset attacks happen at the TCP header data level, there is no way for the sender of the packet to be verified. So, TCP reset attacks can be executed, even over TLS connections.

Now, returning to the premise at the beginning of the post, in the blog post I mentioned at the beginning, there was some attack code, that actually executes a TCP attack. I figured it would be a good exercise to get it to work on Linux!

The script uses the scapy library to sniff for packets, and for cases where the client sends a packet to the server, sends a spoofed TCP packet with the RST flag back to the client.

I ran the script:

and immediately got the error:

A quick Google search landed me on this Stackoverflow page – it turns out that Linux and MacOS name their loopback (localhost) devices differently. While on Linux, the device is named lo, on MacOS, by default, it is lo0.

Changing this in the script immediately fixed the error.

The script seems to work, but the connection is still open!

Alright, so now, with a netcat session open as follows:

In a separate window, I ran the attack script:

After sending another message via netcat, the attack script claimed to have intercepted the packet and sent a RST packet!

However, the TCP connection was still open!

Let’s take another look at Wireshark

At this point, there are a lot of things that could be going wrong. At the packet level, it’s possible that the script wasn’t actually sending a packet. Maybe the packet was misconfigured? Maybe Linux and MacOS have implementations that handle RST packets differently.

While the last hypothesis would be hard to test without doing a lot of research, with our handy friend Wireshark, we could actually take a look at the packet we’re getting back!

So I ran the sniffer script again, and the packet did show up in Wireshark! 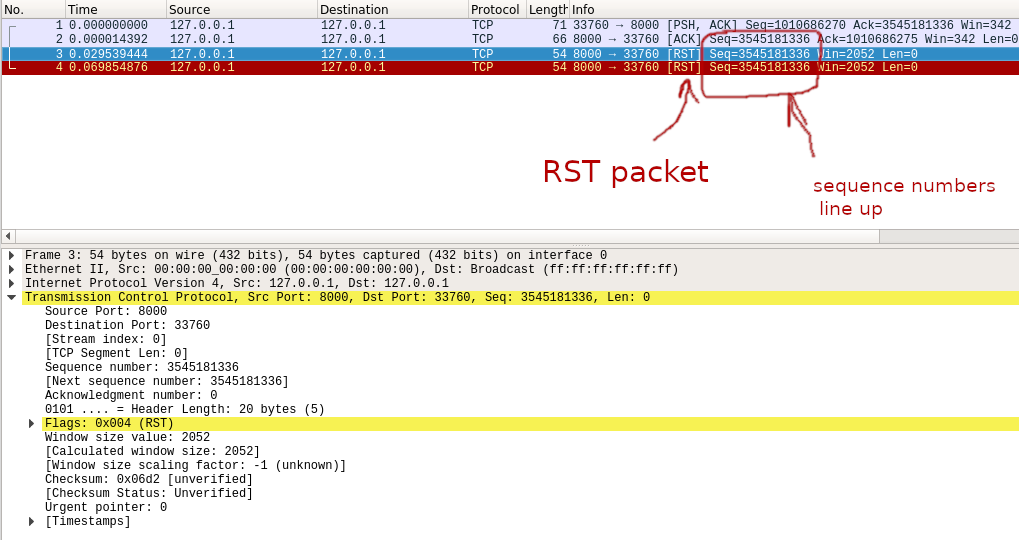 One small thing you’ll note is that the window size of the RST packet is different to what we see on the other TCP packets in that wireshark dump.

Does the window size matter?

The next thing I tried was changing the window size to match up with the other packets:

It looks like the packet is configured correctly. So what’s happening here? We’ve ruled out the hypotheses that the script is not sending a packet, or that the packet is misconfigured. But what if MacOS and Linux handle this flag differently?

The next step here was trying to find a different way to construct and send a packet. If we can get this attack working with a different method, we can rule out the fact that RST packets work differently in MacOS or Linux.

I read a little bit about other ways of sending a spoofed RST packet to the client, and found this handy tool called netwox that can be used to forge packets. This presentation has a good example of a TCP attack.

So, I used the netwox tool after installing it, by running:

Spot the difference between these packets!

It’s subtle. It turns out the ethernet destination address on the packets is different.

So, at this point, we know there’s no difference between how MacOS and Linux handle the RST flag in TCP. However, scapy and netwox configure the packet differently such that the destination MAC address is the “broadcast” address on scapy and 00:00:00:00 with netwox.

At this point I finally decided to look at the scapy documentation (probably should have done this earlier) and it turns out in the troubleshooting section, they have a section about just this. From the docs, they discuss how the “loopback” interface is different to other network interfaces, and how link-level packets sent on the loopback interface don’t actually get disasembled/assembled (and therefore read by applications).

The solution that scapy offers is adding the line of code conf.L3socket=L3RawSocket to your file. I tried this out, and the TCP Reset attack actually worked!

What’s the deal with this socket setting?

What’s actually going on here, and why did the change that scapy suggests work? The answer is in the details of the socket syscall. Note that in this page, it mentions that sockets can listen on different “domains”, or “protocol families”. By default, scapy uses the PF_PACKET protocol family when it opens a socket to send a packet. This is a link-layer (Ethernet) protocol, which is why packets sent via scapy by default have the ethernet broadcast address (ff:ff:ff:ff) as a destination. These packets, however, being link-layer packets, when addressed to the loopback address don’t get routed there correctly, even though they show up in wireshark, because of how the loopback interface works in Linux.

While I probably should have dug into what exactly scapy was doing earlier, going through this exercise of debugging why the TCP Reset attack wasn’t working was really helpful and taught me a lot about computer networks and how to debug them!

The next paper I’ll be writing about is “Understanding Real-World Concurrency Bugs in Go”, from Tengfei Tu, Xiaoyu Liu, Linhai...

A couple weeks ago, I started working on a tool called [Kingfig](https://github.com/squidarth/kingfig). It's a command-line tool to manage your settings...